THE FOUNDER OF KEI 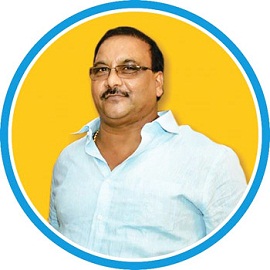 The Late Great Utpal Bhattacharjee, the pathfinder of our institute was born on 12th December, 1957, as the seond son in the wedlock of Late Ranjit Kumar Bhattacharjee and Late Malati Bhattacharjee. He was brought up in a hard-up family and lived in Kumartuli in a rented house during his childhood. His father was an employee of the Ordinance Factory, Dumdum, who shifted his family to a government quarter at 18, Mall Road, Dumdum in 1970. Thus, he anchored at his workplace, the Northern Suburb of the city of Kolkata by the unseen hands of his fate.

The phrase ‘Struggle and Success’ was his firm resolve. Although he could not achieve higher academic qualification because of his hard reality of poverty, he gained valuable realistic education and purified his soul in course of his struggle for existence. In youth, he crossed the political turmoil in Bengal, occasionally he was emotionally influenced by the political ideology, but the prime motto of his life was to work hard, to sacrifice for family members, relatives, friends, neighbours and to help the weaker strata of the society at large. Resultantly, his unmanageable and indomitable spirit and toughness couldn’t blemish his career; rather he became a successful person in all the walks of his life. So, he was counted as the uncrowned leader of the leaders in the locality.

Self- immolation of his parents convulsed the core of his heart. At the initial stage, he was engaged as a labourer to earn some meagre amount for maintenance of their livelihood. Later on, he worked in a press. At last, his self-confidence, personality and prudence persuaded him to start the business of supply of business materials. He also enrolled his name as the enlisted contractor of Dumdum Municipality. He ventured on the business of real estate. The fame of his honesty, good will and punctuality steadily spread over in the business community.

Eventually, his boundless dream, imagination and energy inspired him to lay the foundation of “Kingston Educational Institute”. The journey was full of thorns. Unscrupulous personalities tried to topple down his strenuous mission and efforts in flourishing the entity of our Institute in the educational field. He tackled those untoward situations by his farsightedness. Our Institute is now blooming in the campus of 83 bighas of land, where School, Degree College, 5 years Law College, Management College, Polytechnic College etc are duly recognized and affiliated to, are being run by experienced and expert faculty members who impart education to the pupils. Especially, he introduced 3 years Law course, duly recognized at our corporate building to facilitate the students who are in employment. The B.Ed College is established in our campus, which is also a prime example of his farsightedness. His last dream was to launch and expand our educational activities in the different cities of West Bengal and the neighbouring States. He always strove hard to uplift our Institute as the site of knowledge and sanctity. Besides, he used to sincerely patronize meritorious and needy students for their upbringing and education.

He was a sports lover. He voluntarily came forward to finance the Football Coaching Camp in the playground of Dumdum Jail as well as the playground of our campus under the guidance of coaches like Olympian Nikhil Nandi, Tulsi Balaram and Moti Singh to find out unknown talent.

From the cradle to the grave, he salvaged countless people in the different fields of life and so he was foe-less. The luminary star dropped on 26. 06. 2017 from the galaxy of successful celebrities, a bolt from the blue.

He was and is the anchor of our Institute. He is immortal in the hearts of all staffs, employees, officers, faculties, educationists, students, members and Office bearers of the Society. His generosity, celerity, decision making process, characteristic of grasping the nettle at any situation, prudence, strong morality, transparency and honesty will be our paramount and fundamental beliefs and thought for our long stride in the educational paradise in future.

ONE GIANT LEAP FOR YOUR FUTURE

TALK TO OUR COUNSELLORS